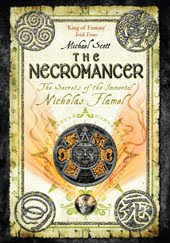 I have been waiting for this book
for the longest time.  I love all of the other books in this series…love every character…Nicholas and Paranelle and Josh and Sophie and Scatty…Billy the Kidd and  Dr. John Dee and even Machiovelli…all of these characters make the books spellbinding. This latest book continues the story of all of the above main characters and their commitment to save the humani.  Nicholas and Paranelle ( the Alchemist and the Sorceress ) are determined to keep the Dark Elders from releasing horrible creatures upon Earth.  If these creatures are released humani will be eliminated.  The plot of this book is all about preventing this nightmare from happening. The plot also revolves around finding a book called the Codex.  This book was formerly in the custody of Nicholas and Paranelle and prevented them from aging.  Without the Codex they are both doomed.  So now we have a quest…actually two quests…saving us…the humani and saving themselves from aging.    The book was exciting. The book was interesting. The book was dynamic. And I am not quite sure why I did not love it as much as I loved the others. It might not have been exciting enough. And yet it was exciting. The Dark Elders want to rule and take over the world. They want to release all of the bad guys from Alcatraz… and by bad guys I mean otherworldly indescribable horrific creatures… while a series of events  takes place all over the world that distract the humani and help the Dark Lords in their path of worldwide destruction.    I loved the interplay between  the main characters and all of the famous and infamous people in history. Prometheus and Shakespeare and Virginia Dare and King Tut and many many others all have key roles in this madness. The plot was still lively but this book almost seemed as though it was a prequel  to the next book. I love this in a series but I just felt a bit restless reading this book. I  loved the bad guy character of Dr. John Dee in this book much more than I loved the supposedly good characters.  He showed a bit of a human side within all of his evilness.  So…what is my final analysis?
Very good but not yummy. Will I read the next one…and by the way it has already been started…you betcha!!!

7 thoughts on “Thoughts Upon Finishing The Necromancer…”