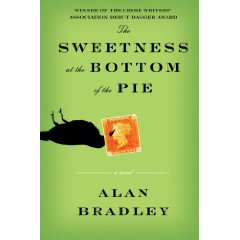 Oh me…Oh my…Flavia de Luce…what a fascinating little person she is!!! Barely 12 years old with a mind that absorbs chemistry and all of its applications as though she was a mad scientist. What an odd sad household Flavia is a part of. A long gone mother whom she never knew, two sisters who torture her horribly, and a very aloof unhuggable father…this is the essence of Buckshaw…the place the de Luce’s refer to as home. Flavia has inherited all of the chemistry equipment of a dead relative complete with simmering beakers and a skeleton. Yikes!!! Flavia loves this room that is solely hers within Buckshaw…it is her refuge and it is also the place where she plans chemical revenges on her vengeful sisters. It is also the place that calms her because nothing is as wonderful to Flavia as writing in her notebook and figuring out her experiments.

I found this book to be just a tad difficult at its beginning. It took a number of reread pages for me to get used to the characters and the total “Englishness” of the book but after the first few rereads it was not an issue at all…I became totally absorbed in this mystery, the characters, the events and most of all Flavia. I love English settings and mysteries with a passion and this one was perfection. It had twists, turns, fascinating characters…in fact the only thing missing was the butler…but that place was held by Dogger…the de Luce’s all around gardener, caretaker and handyman. One of my favorite aspects of this book was the relationship that Flavia had with Inspector Hewitt…it was just the right touch of respect, admiration and humor. I already own the second Flavia de Luce book and can’t wait for more.